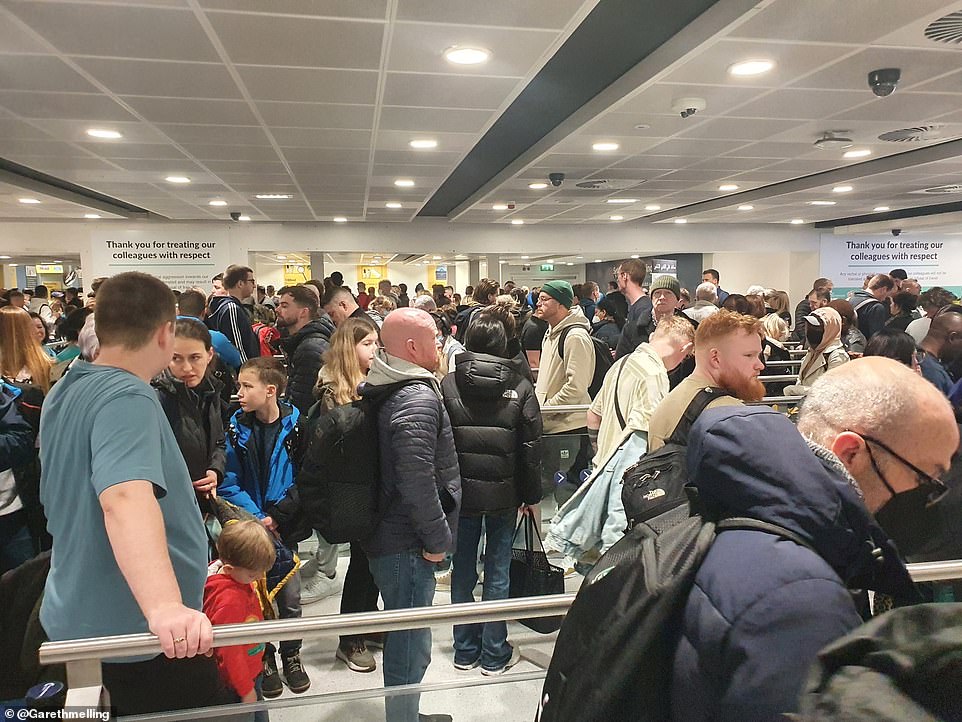 Chaos on the third day of Easter break: Sick staff caused huge queues at Manchester and Heathrow due to Covid-19, EasyJet and BA canceled flights, waited two hours at Port of Dover, Eurostar passengers left with a train stuck in a tunnel faced a three-hour delay

Britons flocking abroad for their Easter holidays face ‘absolute chaos’ at Manchester Airport today as EasyJet passengers battle canceled flights and motorists queue up for two hours at the Port of Dover.

Images showed people queuing up for security this morning, while passengers complained about a lack of organization at the gate.

There have also been reports of disruption at Heathrow Airport, which faced its own chaos last week following the major collapse of British Airways.

Budget airline EasyJet canceled up to 100 flights today due to Covid-mandated staffing shortages. The airline has cut at least 222 flights since Friday.

BA also canceled at least five flights to European destinations, including Paris and Oslo, from Heathrow’s Terminal 5 this morning.

Meanwhile, drivers this morning reported a two-hour wait at the Port of Dover. Congestion around Dover, poor Channel conditions, and the suspension of P&O services caused delays of up to nine hours in the Port of Kent yesterday.

Eurostar services were also delayed by up to three hours as a train stopped in the Channel Tunnel.

Meanwhile, airport disruptions have been blamed on Covid-mandated staffing shortages, with Manchester Airport yesterday saying it was exploring the possibility of bringing in short-term agency staff to help control the chaos.

As many as 4.9 million people are now believed to be infected with the virus, even though England has lifted all coronavirus restrictions – as well as testing and self-isolation requirements – according to the UK’s largest coronavirus surveillance program.

The US Office for National Statistics (ONS) estimates that more than 4.1 million people were infected with the virus on any given day in the week ended March 26, or 1 in 13 people.

Images show people lining up for security this morning, while passengers complain about a lack of organization at the gate

Passengers said they faced “absolute chaos” at Manchester Airport this morning, with long queues at security.

EasyJet canceled more than 220 flights and blamed the disruption on high employee sickness rates due to the Covid-19 outbreak.

At least 222 flights have been cancelled since Friday, including 62 scheduled for Monday, most of which were canceled for short periods of time on Saturday.

The number of Covid infections is some of the highest since the pandemic began.

An EasyJet spokesman said: “Due to the current high rate of Covid-19 infections across Europe, like all businesses, EasyJet has higher-than-usual levels of staff sickness.

“We have taken action to alleviate this situation by increasing the rotation of our crew on standby this weekend, however, given the current level of illness, we have also decided to cancel some flights earlier.”

The focus, they said, was “to consolidate the flights we have multiple frequencies so that customers have more options to rebook their travel, often on the same day.”

They added: “Unfortunately, some additional cancellations are necessary today and tomorrow.

“We apologize for any inconvenience this may cause customers on affected flights.

“We have early cancelled 62 flights to and from the UK tomorrow, which is only a fraction of the total flight schedule of more than 1,645 flights planned for tomorrow.

“We canceled most of them yesterday.”

One passenger shared a photo of the queue, saying: “It was chaos at Manchester Airport at 5.30 am. No organization whatsoever! Lots of missed flights.

Another who shared the video said: “Manchester Airport. “This is the current line through security at Terminal 2 this morning. What’s wrong? ‘.

This comes after shocking images showed massive damage at Manchester Airport over the weekend.

On Sunday, one user tweeted: “Manchester Airport is less than ideal because it’s so busy. Well done because it’s well organized and the amazing staff is smiling through abuse and announcements etc… to our Fast-track passes feel guilty about not being able to use them.

“As we recover from the impact of the coronavirus pandemic, our entire industry is facing staffing shortages and recruitment challenges.

“As a result, we are advising customers that security queues may be longer than usual, and we encourage them to arrive at the earliest times recommended by the airline.”

“Due to the safety checks and training associated with these roles, it takes time for people to start working in our operations

“That’s why we’re exploring some short-term measures to provide the best possible service, such as using agency staff and different ways our existing colleagues can support our operations.

“We are aware that airlines and third parties (such as baggage handling agents) that operate on our website face similar challenges.

“We are working together to provide the best possible service under the circumstances and to resolve these issues as quickly as possible.”

Meanwhile, EasyJet cancelled about 100 flights on Monday, 62 of them from the UK. The budget airline said higher-than-usual employee absenteeism due to the Covid-19 pandemic was to blame.

One of Europe’s largest airlines, EasyJet, said the cancellations were a small fraction of its Monday flights of about 1,645 flights.

But it left passengers facing long delays. A passenger who was due to take off from Belfast Airport on easyJet this morning tweeted: “His first trip abroad since Covid. Going well…EasyJet cancels flight five hours early.

On Sunday, one user tweeted: “Manchester Airport is less than ideal because it’s so busy. Well done because it’s well organized and the amazing staff is smiling through abuse and announcements etc… to our Fast-track passes feel guilty about not being able to use them. Those who took the ferry to France fared better. Some truck drivers reported delays of up to two hours arriving at the Port of Dover this morning. One person tweeted: “Update… Nearly two hours into Dover, I’m almost checking in. ”

An easyJet spokesman told the BBC: “Due to the current high rate of Covid-19 infections across Europe, like all businesses, EasyJet has higher than usual levels of staff sickness.

“Unfortunately, some additional cancellations are necessary today and tomorrow. We apologize for any inconvenience this may cause.

Away from the airport, those who take the ferry to France fared better. Some truck drivers have reported delays of up to two hours arriving at the Port of Dover this morning.

A stalemate in Port Kent traffic, poor sea conditions in the Channel, and recent staffing issues have resulted in the suspension of P&O services, resulting in a nine-hour delay yesterday.

The British Ports Association told The Times it expected congestion to ease, but the disruption would continue until the middle of the week.