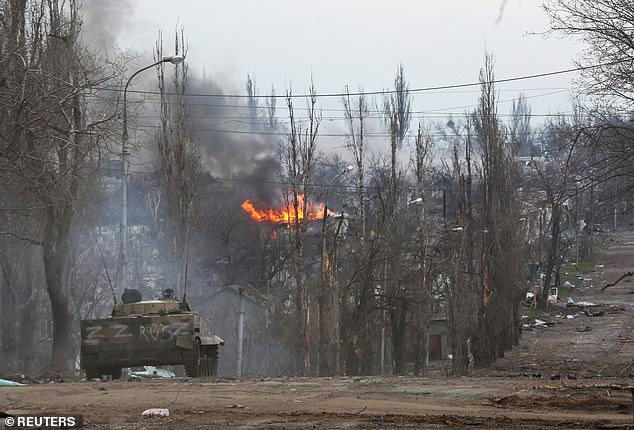 Pentagon says it is investigating reports Putin used chemical weapons in Mariupol, while Biden says U.S. will respond ‘in kind’ to attack

The Pentagon is closely monitoring reports of a possible Russian chemical weapons attack on the besieged southern Ukrainian city of Mariupol, officials said on Monday.

“We are aware of social media reports that Russian forces have deployed a potential chemical munition in Mariupol, Ukraine,” said Defense Department press secretary John Kirby. “We cannot confirm at this time and will continue to monitor the situation closely.”

“If these reports are true, then we are deeply concerned and reflect our concerns that Russia may use various riot control agents in Ukraine, including tear gas mixed with chemicals,” Kirby said.

President Joe Biden has previously warned that Russia is highly likely to deploy a chemical weapons arsenal, warning of “serious” consequences if they do.

The British government and other Western allies are also investigating claims that Vladimir Putin’s army deployed a chemical agent that sickened a small number of people in Mariupol as Russian forces tried to take control of the city.

Pytor Andryushchenko, an adviser to the city government, said local officials believe some of the chemicals were dropped by a drone at the Azovstal steel plant, a stronghold of the Ukrainian army defending the city. They said it was unclear whether it was intended to be fatal.

He said it might have been tear gas or something, but they couldn’t be sure.

“That’s absolutely correct information, yesterday from a drone, something fell into that area, and it had some chemicals in it,” he told The New York Times. “But we’re not sure if it was poison or something else.”

Deputy Defence Minister Hanna Maliar said phosphorus munitions – which can cause horrific burns but are not chemical weapons – may have been used.

Meanwhile, a senior U.S. defense official told reporters on Tuesday that the U.S. could not confirm the reports because they had no field presence in Mariupol.

“The biggest challenge is that we’re not there,” the official said, adding that they were unable to speak to locals.

Russian troops are trying to occupy the city of Mariupol; local officials say more than 10,000 civilians have been killed

Putin, who has failed to capture the capital, has been rallying forces for a new offensive in the eastern Donbas region.

On Tuesday, he said Russia had “no choice” but to launch what he called a “special military operation” in the region, which he claimed was to protect civilians in the predominantly Russian-speaking Donbass.

Mariupol, located in the Donbas region, was razed in a six-week attack by Russian troops. Local officials said the explosion had killed more than 10,000 civilians.

The UK government is also investigating allegations of the use of chemical weapons.

British Foreign Secretary Liz Truss said Downing Street was “urgently” verifying details of the alleged attack and that if true, Putin would be held accountable.

“There are reports that Russian forces may have used chemical agents in their attack on the people of Mariupol. We are working urgently with our partners to verify the details,” she tweeted.

“Any use of such weapons will relentlessly escalate this conflict, and we will hold Putin and his regime accountable.”

Concerns were also raised after the spokesman for the Kremlin-backed, separatist Donetsk People’s Republic, Eduard Basourin, urged Moscow to introduce “chemical forces” for use in Mariupol.

He said on Russian television that the remaining Ukrainian troops left in Mariupol were excavated at the steel plant and that Russia should surround it and “kill the gophers”.

Ukrainian President Volodymyr Zelensky seized on the report and warned his people to prepare for a “new phase of terror against Ukraine”.

‘The occupiers have issued a new statement proving they are ready for a new phase of terror against Ukraine and our defenders. One of the occupiers’ mouthpieces said they could use chemical weapons against Mariupol’s defenders. We take this matter as seriously as possible,” Zelensky said in a video statement posted online Monday night.

“I would like to remind world leaders that the possible use of chemical weapons by the Russian military has been discussed. And at that time, it meant a need for a tougher and faster response to Russian aggression,” he added. Say.

The 1997 Chemical Weapons Convention prohibits the production, use and stockpiling of chemical weapons.

Pavlo Kyrylenko, governor of the eastern Donetsk region, said he had seen reports of possible use of chemical weapons by Mariupol but could not confirm it.

“We know that at midnight last night, a drone dropped some hitherto unknown explosive device, and the people in and around the Mariupol metal plant, three people, began to feel sick,” he told CNN.

In March, Biden said he would not tolerate the use of chemical weapons. But he did not elaborate on the consequences for Russia if Russia made such a move.

U.S. officials have expressed concern that Russia could use chemical weapons as it tries to make progress in the war.

“I’m not going to talk about intelligence, but if they use chemical weapons, Russia will pay dearly,” Biden said.

Biden also said the U.S. would respond “in kind” to such attacks. His national security adviser, Jack Sullivan, said that means “we will respond accordingly” and Russia will pay a “heavy price.”

Russia has used chemical weapons in the past. Moscow used the deadly Novichok poison in an attempted assassination of a defector living in Salisbury, England in 2018. It is suspected of having used a similar poison on opposition leader Alexei Navalny in 2020.

Russia also provides diplomatic cover for Syria’s use of chemical agents. It accused the West of being behind the 2017 attack on Khan Sheikhoun with sarin or a similar nerve agent.