NARVA, Estonia — The city of about 55,000 people on the border with Russia could be on the brink of a new Iron Curtain caused by Russia’s invasion of Ukraine. It is a place between two worlds, where Russia and Russian identity meet Estonia and the West.

This is also evident in architecture: Soviet-era hard-edged brutalist buildings or nestled between sushi restaurants, German grocery stores and startup incubators. The curvaceous new mall with stores like H&M contrasts sharply with the heavily guarded and busy border checkpoint less than a mile away. About 3,000 people cross the border every day. Russians come to Estonia to buy cheese or other Western goods that they cannot buy at home, and Estonians sometimes travel to Russia to buy cheap fuel and construction supplies.

The populations of Estonia and the neighboring Baltic states of Latvia and Lithuania reflect this mixed and tense geopolitics. Many people here describe three camps of Russian speaking. About a third were completely opposed to Russia’s war in Ukraine, while an in-between group expressed hope for peace but expressed confusion at wobbly coverage by Western news media and Russian propaganda sources. A small group supported the Russian invasion.

With Russia insisting on attacking Ukraine under the guise of protecting ethnic Russians in the Donbas region and falsely claiming it is rooting out the Nazis, there are fears that Russian speakers in the Baltic may offer President Vladimir Putin another avenue to expand Russia’s sphere of influence. Some also believe the group could be manipulated by Moscow — and propaganda spread across borders — as an unwitting proxy for the beginning of a new Cold War.

In addition to the unrest, more Russians likely to oppose Putin are crossing the border as they flee the country’s repression and spiraling economy.

“We realized we were at a huge risk and had to leave,” said Felix, a Russian IT professional who asked to withhold his surname out of fear of the Kremlin. “When the war started, we thought that all possibilities of going abroad, going abroad, etc., were very likely and would simply be closed – the Iron Curtain would fall.”

Felix attended and helped organize protests for weeks until rumors of martial law and increased border security convinced him to flee to Estonia with his family. They still hold tourist visas for their most recent visit and have purged their social media accounts and mobile phones of any material that could be seen as anti-Putin or anti-Ukrainian war.

Dmitri Teperik, chief executive of the International Centre for Defence and Security in Tallinn, said Russian identity and the Russian language were once considered political issues used in elections, and he has led efforts to bring Russian-speaking people together. People integrate into Estonia. This has changed.

“Unfortunately, since 2014, the discourse within our society has shifted to looking at the Russian-speaking population through the prism of safety,” Teperic said.

The former government official lamented that Estonia’s past integration efforts were reactionary. In 2007, pro-Kremlin activists started a riot after the Estonian government chose to move a bronze statue of a Soviet soldier in the capital, seen by many as a symbol of repression.

After that, Teperic said, Estonia sought more outreach methods that the government repeated every time Russia lashed out: Georgia in 2008, Crimea in 2014 and now in 2022.

“These are very serious signals,” Teperic said, “and our politicians and state authorities are starting to pay a lot of attention to the now-famous question: ‘Will Narva be next?'”

“Let’s not deceive ourselves”

With more than 95% of Narva’s residents speaking Russian and at least 30% holding Russian passports, every Kremlin aggression becomes a flashpoint for the city.

A recent government poster circulating in Narva asked the question in Russian, Ukrainian, Estonian and English: “Do you have any connection with Russian or Belarusian intelligence agencies, or do you know any Anyone contacted? Report these to Estonian Internal Security.” 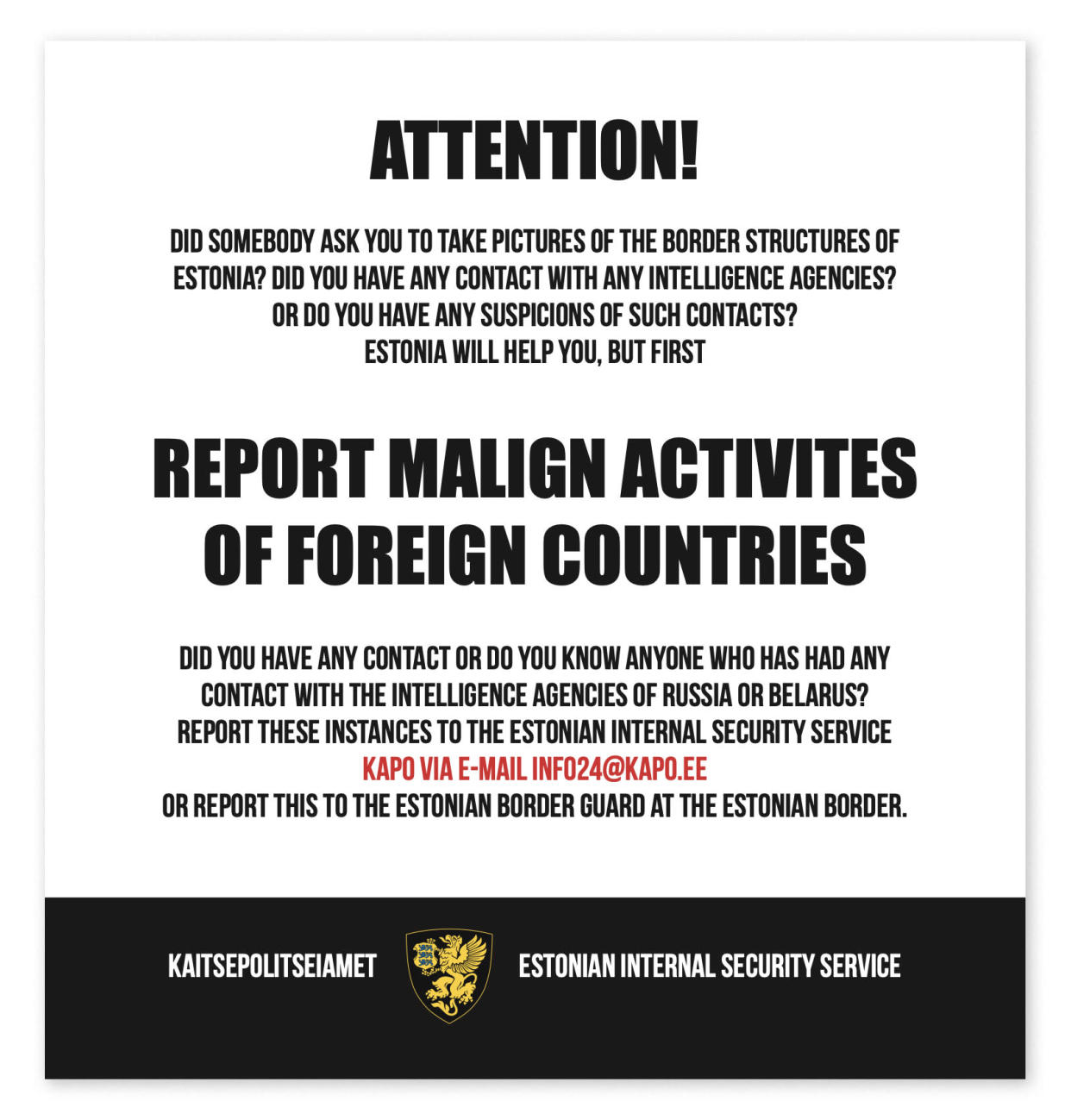 Jürgen Klemm, a press officer for Estonia’s Internal Security Service, said the agency could help those who were used by foreign intelligence agencies but had to come forward.

“We’re going to give these people the best way out of this situation that the Russian or Belarusian intelligence agencies have put on them,” Clem said. “Otherwise, with a criminal conviction, people could be charged with treason and endangerment. Find their names on the list of people convicted of state crimes.”

Estonia and other countries have tried to integrate Russian-speaking communities to varying degrees in the past, but these efforts are taking on a new urgency. The war in Ukraine has increasingly worried some officials in the Baltic states that Russian speakers could be a sign of disinformation that threatens national security.

Such concerns are a response to the Kremlin’s doctrine of nationalism. While Estonian government officials are not concerned about Russia becoming a direct military threat, they are still aware that Moscow could pose a significant threat to their national security and that Russia’s expansionist program may not end in Ukraine.

More signals come from Russia itself: the State Duma, the lower house of parliament, says it is considering legislation It said last week that the goal of the Ukrainian war was “an opportunity to finally create an open Eurasia – from Lisbon to Vladivostok”.

In response, Estonia pushed for greater military support from NATO and recently added some restrictions on Russians and Belarusians who want to declare residency in Estonia, making it harder for those from these countries to travel here without a visa .

Estonian police and border guards have also stepped up security measures at border crossings. Eric Liva of the Estonian Police and Border Guard said they had strengthened the border and were conducting longer interviews with those crossing the border, conducting more thorough checks of vehicles and belongings and putting in more personnel. to monitor the area. 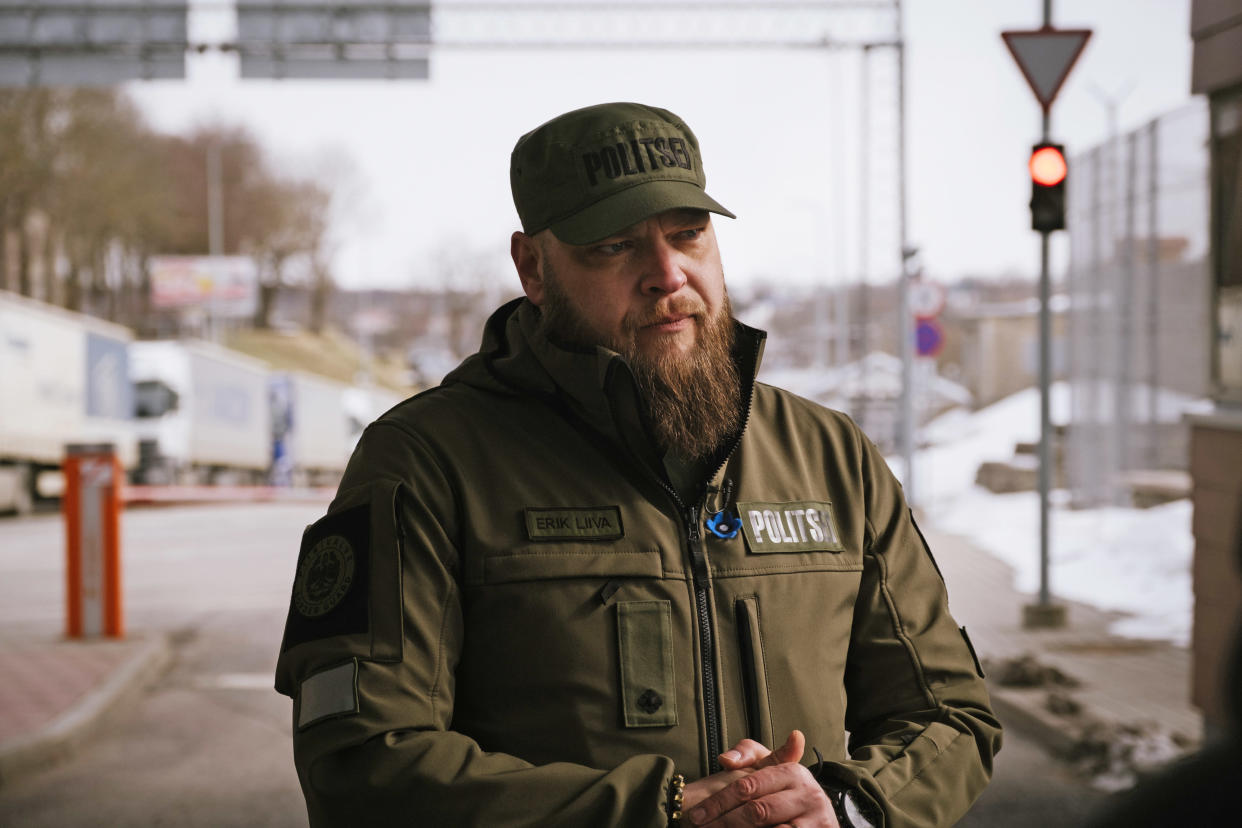 Latvian Foreign Minister Edgars Rinkēvičs said in an interview last week that the government is closely monitoring the situation. Officials have given Russians more than 160 humanitarian visas since the war began, but they have restricted immigration from Belarus and Russia as much as possible because some are simply fleeing the economic situation.

Meanwhile, the Latvian parliament is considering a bill that would suspend the issuance of temporary residence permits to Russian and Belarusian citizens until July 2023. The second bill would allow the deprivation of Latvian citizenship of those who support war or other crimes against a democratic state or who commit these crimes.

“Let’s not kid ourselves,” he said, asserting that some Western governments have wrongly insisted that Putin’s views do not reflect the views of the Russian population. “There’s a strong sense that they need to rebuild some kind of empire, they need to make Russia great again, and many people have that feeling.” 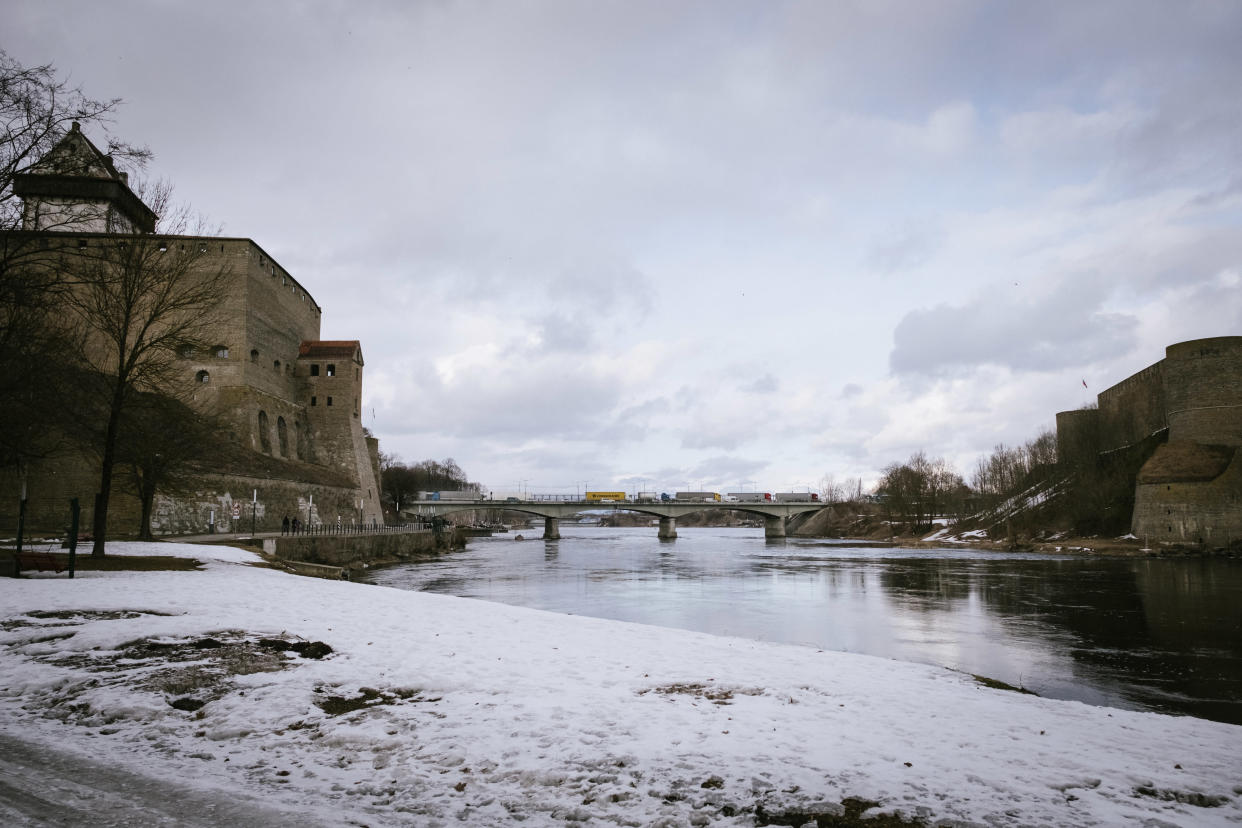 Estonia has taken in about 25,000 Ukrainian refugees since the war began, Liimets said, demonstrating its commitment to Ukrainian refugees – equivalent to 2 percent of its population. In the United States, this would amount to more than 6 million refugees.

She added that the Estonian government is also working to ensure that Estonian residents know the truth about the conflict.

“We also saw a massive campaign against disinformation and misinformation in Russia, and of course our Russian-speaking community follows a lot of Russian news,” Liimets said. “So, from our perspective, it’s very important to continue to explain to our society who the aggressor was and what really happened in Ukraine – that’s what we continue to do to all of us.”

Estonia, like other countries, bans Russian media deemed propaganda. Such channels are often popular among Russian-speaking households, not only for the Kremlin’s rampant news and talk shows, but also for their entertainment — more of a suave detective show and historical drama.

However, those who pay for a premium cable package or buy a satellite dish can still access them, but officials here say they want to put at least one barrier to entry and limit the amount of advertising revenue that Russian propaganda channels can earn.

They also increased their investment in Estonia’s own Russian-language media. Estonian government-backed Radio 4 and ETV+ have recently expanded their programming options, but they still compete with the views and opinions of the audiences they serve. 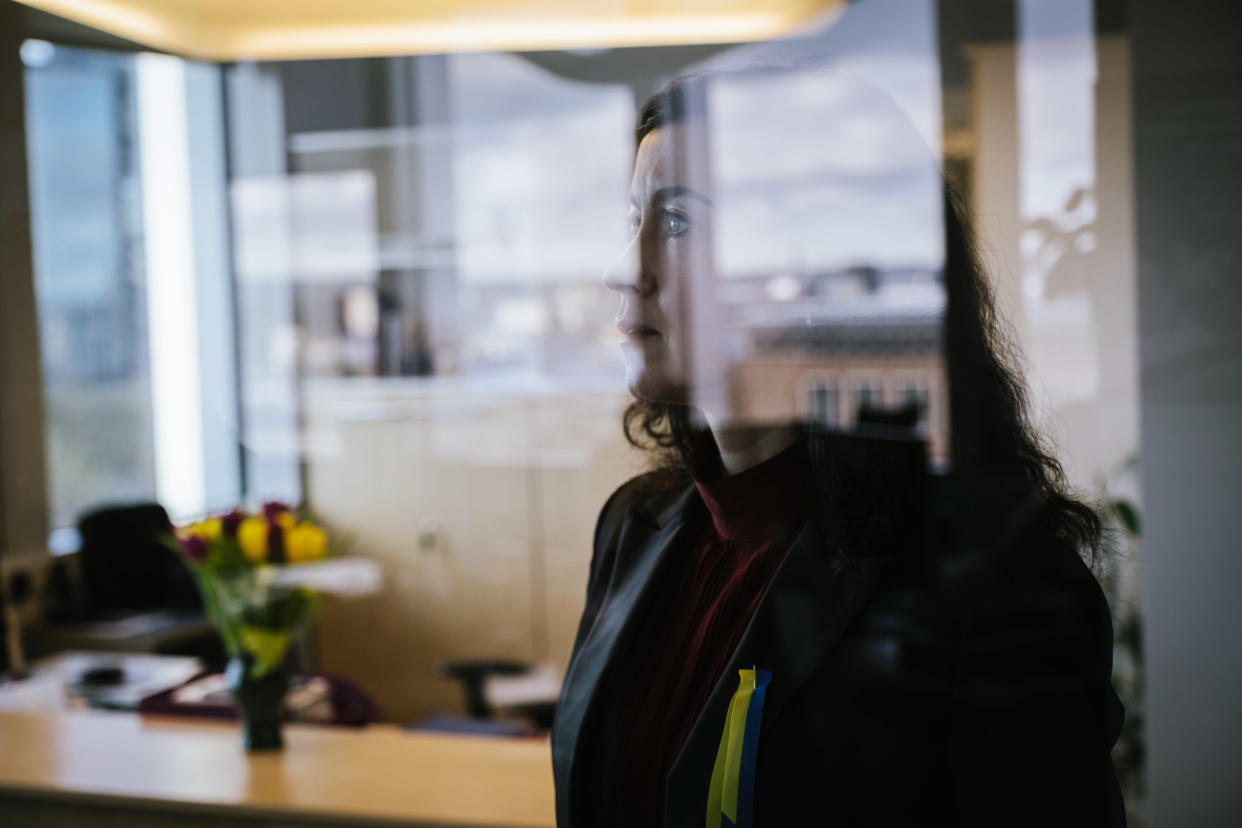 Radio 4’s editor-in-chief, Julia Bali, said the channel – Estonia’s largest Russian-language broadcast channel – lost 30 percent of its audience after closely covering Russia’s invasion of Crimea and its counterattack against the Kremlin. She has a feeling she may now be losing her audience again.

She said listeners often called the radio and called her a “Nazi,” a “fascist,” or even a “slave of the U.S. State Department” for her opposition to Putin and Russia.

“I take the time – as best I can – to talk to everyone who calls or writes to me, even on weekends, evenings. We’re always online,” Bali said. “It’s part of our job, and it’s normal now. It’s nothing special. We have to do it, or these propaganda channels will eat up all the listeners and all the viewers, and they have no choice.”

Still, the truth is relative in a place like Narva, a town that is geographically close to Russia but still considered a bit nebulous by some.

Jevgeni Timoštšuk, a Russian-speaking Narva resident, is the project coordinator of the Narva branch of the Nordic Council of Ministers, an intergovernmental organization, who conducts workshops for Russian-speaking residents on how to identify disinformation, but he Said even if he was at times.

“I have friends from St. Petersburg who tell me that all the European and American media is propaganda, and then we were told in Estonia that everything in Russia was propaganda, and we were in Narva between these two worlds,” Timoštšuk said. “I myself read the news once a day and try to get the big picture — Russia says it, Ukraine says it, America says it — maybe after that, I can understand something, but I’m not sure.”

Correction (April 11, 2022 6:00AM ET): A previous version of this article incorrectly stated the name of the Estonian TV channel. It’s ETV+, not NTV+.